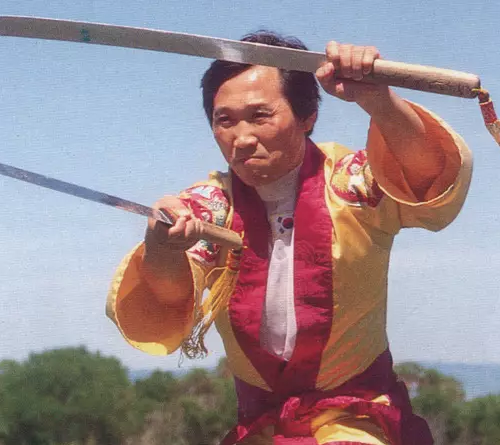 Unlike any other martial arts style, Kuk Sool Won™ is headed by one master who maintains a strict quality control over all schools that teach Kuk Sool, ensuring that all students learn the art as it has been taught for thousands of years.  Our Grand Master is In Hyuk Suh, whose title is Kuk Sa Nim, or National Instructor.

In Hyuk Suh originally organized the many different facets of ancient and contemporary Korean martial arts into the current curriculum of Kuk Sool Won™ and he is the founder of the World Kuk Sool Association™, formally establishing it in Korea in 1958 Grandmaster Suh’s introduction to the traditional Korean martial arts began at the age of five in the early 1940’s. His first teacher was his grandfather Suh, Myung Duk, who was a Master Instructor of the Korean Royal Court army before the Japanese occupation of Korea in 1910. After returning to his hometown of Taeg, Grandmaster Suh, Myung Duk secretly taught only members of his immediate family, continuing the family’s tradition of practicing the martial arts as it had been done for sixteen generations. When Suh, In Hyuk was old enough to begin his training, he immediately showed such promise that his grandfather decided that he would be the one to whom he would give the greatest attention.

Sadly, Suh, Myung Duk was fatally wounded in the Korean war in 1952. However, the young Suh, In Hyuk continued his training under various masters of the traditional Korean martial arts, thanks to letters of introduction written by his grandfather which opened doors that otherwise would have remained firmly closed. During those early years, he visited literally hundreds of martial art Masters in villages and temples all over Korea and was able to study the many and varied aspects of traditional Korean martial arts from the three major traditions that had evolved over the centuries; the three traditions being:

In 1958, after many years of study, Suh, In Hyuk systematised and organised the myriad techniques he had learned and created the art of Kuk Sool Won™. It was at this time that he revealed a secret inheritance from his late grandfather of a compilation of five books containing all the knowledge of the Korean Royal Court. With the inheritance of these books, the title of KUK SA NIM was bestowed on the young master, which means, ‘National Martial Art Teacher’ – a title officially recognised by the Korean Government.

Below is a brief timeline Kuk Sool Won across the Globe:

1958 Founding of the martial art of Kuk Sool Won™

1976-77 40 Kuk Sool Masters appear in Ho Kuk Moo Yea, (translation: Art Used in Defence of the Nation) a documentary produced by the Korean Ministry of Culture and Tourism

1991 Kuk Sool Won™ was selected as an extra curriculum activity for the U.S. Military Academy at West Point

1992 Grandmaster In Hyuk Suh is presented with the Commander’s Sword by the U.S. Military Academy at West Point

1994 Several universities in the U.S.A. include Kuk Sool Won™ as a regular athletic activity

1994 Grandmaster In Hyuk Suh is presented with the Commander’s Sword by the U.S. Air Force Academy at Colorado Springs

1999 Victory of a Little Giant, a special documentary about Grandmaster In Hyuk Suh produced by the Korean Broadcasting System (KBS aired 3/17)

2002 Kuk Sool Won™ hosts the World Kuk Sool Championships at the Civic Auditorium in Kyung Ju this is an international event with over 2000 competitors from across the globe, also received were proclamations for a successful event from many world leaders such as North Kyung Sang Provincial Governor Lee, Kyung Ju City Mayor Baek, over a dozen U.S. State Governors, and U.S. President G.W. Bush

2004 Publication of a biography of Kuk Sa Nim in Korea by Ms. Moon Young Kin with Sam-Toh Publications

2008 In October, Kuk Sool Won ™ celebrates its 50th anniversary at the World Championship in Houston, Texas